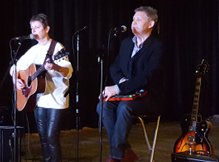 Rose Price is an acclaimed singer/guitarist in folk, acoustic & roots music and Martin Medina is a singer, multi-instrumentalist, and composer for many award-winning TV and Radio programmes.

Together, they have performed in line-ups featuring some of the most sought-after and celebrated artistes in the field of UK folk, acoustic & roots (including O’Hooley & Tidow, Nancy Kerr & James Fagan, Gilmore & Roberts, Jackie Oates and Hannah Sanders & Ben Savage).

Both Rose and Martin have demonstrated their solo and collaborative strengths in diverse musical contexts that have influenced their arrangements and repertoire.

With 2020 putting paid to live performances, the duo became involved in producing video sets for online shows instead. It was as a result of their video in a seasonal event (11 December, 2020) that they decided to record the single, The Mistletoe Bride.*

Kate Mosse, the award-winning author whose work inspired the song, has described it as, "absolutely and utterly beautiful".

*The single is the precursor to an EP (anticipated release in late Spring/early Summer 2021).

Based in the North West of England, UK, Rose & Martin have been performing as a duo since 2017.  Their popularity has grown significantly, as new audiences discover their blend of skilfully articulated guitarwork and distinctive harmonies across a repertoire of contemporary folk and original songs.